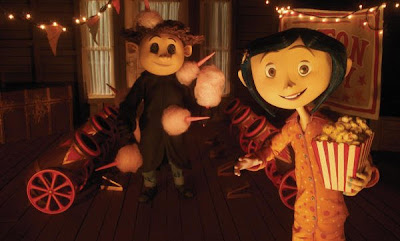 Coraline is my valentine this year.

Congrats to the folks at Laika. I'd been looking forward to this film for a long time and it didn't disappoint. I hope it attains the success it deserves and enables to the studio to bring us more good stuff. I was saddened that in box office terms it took a backseat to an epic shallow regurgitated garbage heap, but at least it did better than an ill-conceived sequel to a needless remake. Hopefully word of mouth will spread and the people who decided to watch crap last weekend will redeem themselves and see Coraline this weekend. And you should too! In 3D or not, it's well worth it.

Check out this interview with character designer & sculpter Damon Bard as well as examples from his amazing portfolio.
. 11:48 AM

The animation was amazing. But I have to say the story felt a little flat. But overall I hope the film makes millions of dollars! We need more stuff like that on the market!